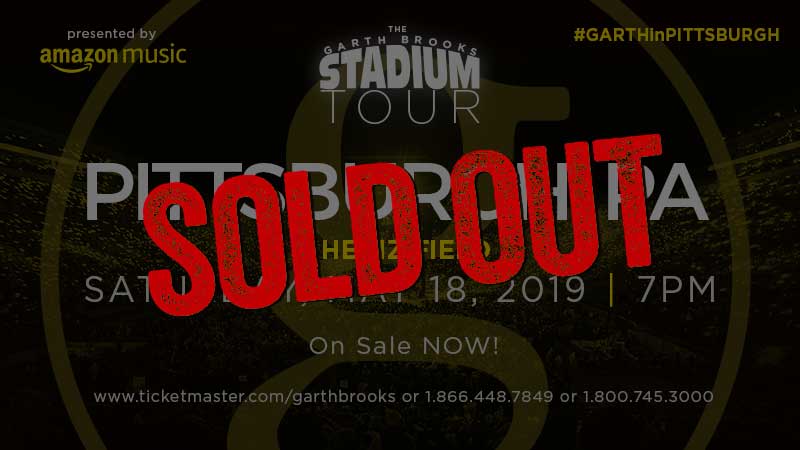 As of this morning, Garth Brooks’ upcoming Stadium Tour stop at Pittsburgh’s Heinz Field is sold out…and it has set an all-time record for any and all events that have ever taken place at the stadium!!!

72,887 people will be on hand on May 18 to see and hear the entertainer in concert at the home of the NFL’s Pittsburgh Steelers. That’s more people than the stadium has ever held for any prior event…and it’s been host to plenty! That includes concerts by such artists as The Rolling Stones, U2, Beyonce and Bon Jovi. In addition to home sellouts for the Steelers, Heinz Field has witnessed such huge sporting events as the 2011 NHL Winter Classic and a special 2017 NHL game pitting the city’s Penguins against the cross-state Philadelphia Flyers…not to mention a 2016 renewal of the collegiate Penn State – Pitt college football rivalry (the prior record-holder with 69,983 people in attendance)!

The news comes on the heels of Garth’s just-completed spring training run with the Pittsburgh Pirates (to raise awareness and celebrate the 20th anniversary of his Teammates for Kids Foundation). It also arrives as he prepares to kick off his first Stadium Tour March 9 with a sellout in St. Louis (concerts in Glendale, Arizona [March 23]…Gainesville, Florida [April 20]…and Minneapolis [May 3-4] will follow)…and as he gears up for tonight’s initial offering of his just-announced vinyl package, Legacy (online at 7:00pm ET/4:00pm PT at https://garthbrooks.com/vinyl)!